The Cannes Lions International Festival of Festivals originated at the Cannes Film Festival and was originally initiated by a film advertising media agency. It was followed by posters and awards, ideas, and networking. Cannes International Creative Festival has gradually developed into an important advertising and creative industry exhibition in the world, and is known as the "Oscar of Advertising".

This year's Cannes International Creative Festival was held in Cannes, France on June 21st. The advertisers and brand owners focused on this and witnessed the most outstanding advertising works of the past year. The small screen will bring everyone to review Cannes International's creativity. A wonderful digital outdoor advertising case in the festival.

Extremely a peculiar natural phenomenon that can only be seen in the Arctic Circle. When there is extreme paralysis, the sun always hangs in the sky within 24 hours a day. 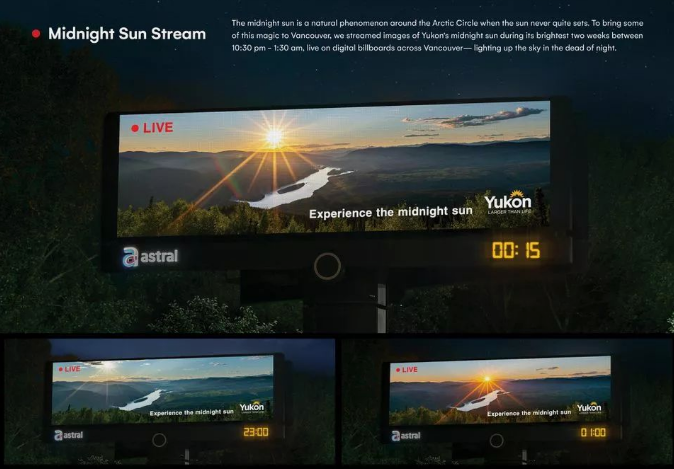 In order to attract people from the Vancouver area to travel, local travel companies broadcast live this digital scene through digital outdoor media from 10:30 to 00:30 in the evening, attracting more people to travel and feel the scenery. .

In early 2019, a digital outdoor media company in Stockholm and the city government launched a charity event to let homeless people quickly find nearby shelters and how to receive information on volunteers and donations.

When the night temperature is below 7 degrees Celsius, local churches and non-profit organizations will set up emergency shelters, and the location of these shelters will be synchronized to the street's digital outdoor media in real time, using billboards to tell nearby homeless The location of the refuge and the arrival time of the returnees, this warm-hearted move allows the homeless people on the street to quickly find shelters and avoid the difficulties caused by the cold winter. 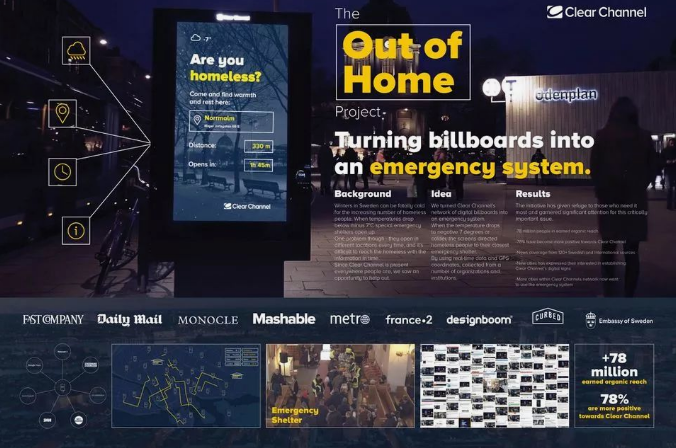 As part of the WOW! JAPAN promotion, the “Ninjas” appear on the outdoor screen of the MODI building in Shibuya every day while passersby waits for the red light. The "Ninja" on the screen keeps jumping, splitting, and stunning, which is very realistic. After the performance, the official also sent a real "Ninja" suddenly appeared in the passers-by, and surprised with foreign tourists.

Next Article:Chinese brands have fought a good fight recently